The parallel roads of Cristiano Ronaldo and LeBron James 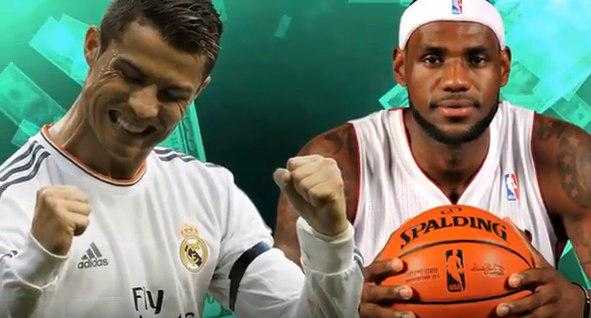 “CR7 and King James are living a similar moment of their careers: both 33, in the last season they played at an unbelievable standard for athletes of their age, showing a technical, physical and mental domination on their sports with few peers in history. Both Cristiano and LeBron reached such a level that sent them above every suspect or criticism: they have nothing left to demonstrate to the world, their legacy is sure and they have an ensured place among the greatest of all time”. These words by Dario Vismara (full version for Sky Sport here) should be enough to sum up the meaning of the potentially most significant summer for those lucky supporters of Juventus and Los Angeles Lakers, or even for the ones who, following the all-american precept “Real recognize real”, can’t avoid to notice the similes in the sport and human tale of two of the greatest athletes of our time (the best two, according to ESPN).

Whatever you are football or basketball addicted, or both or even none of them, the relationship of direct proportionality beteween the champions’ last career and life choice – a challenge to themselves first and then to the others, quite a normal behaviour for them -, which occurred with a number of coincidences too incredible to look random – including the minimalist presentations to the new fans – is the red thread that connects a storytelling and a respect that go beyond the mere sport perspective (Marca journalist Mikel Saez de Vicuna already wrote about it in January 2017, after a legendary 2016 for both of them). James and Ronaldo are far more than the best basketball and football players in the world (and maybe of all time; I wrote about CR7, together with Messi, here): they are global and globalized icons, representations of the pursuit of perfection which is translated in that ferocious obsessiveness, that infinite hunger, the will of being the best at all costs, perfexctly recognizable for their behaviour inside and outside the pitch.

It’s all about personality, mental toughness, about the ability of matching unthinkable expectations and fearful pressure that would wear out any other human being, about a confidence in their own skills coming from the awareness of having trained hard their talent, in a modern transposition of the “superhuman” concept.
The problems (supposing that they existed) with their now former employers are the least important side of the coin: it was that ancestral competitiveness that made them leave their comfort zone – being the primus inter pares of the most famous football team of the world led to four Champions League trophys for Cristiano; dominating the entire Eastern Conference reaching the NBA Finals for 8 consecutive seasons for LeBron – , looking for new challenges, new incentives, new limits to reach and surpass. Talent, training and extreme professionalism are ok, but you can’t be James or Ronaldo without that inner fire that leads you to take risks everytime, against everybody, regardless of logic, age, common sense, potential fulfillment, ferocious and often unmotivated criticism. Just like this commercial with Michael Jordan, a similar (or even better) model of obsessiveness and winning mentality:

“Challenge me, doubt me, disrespect me. Tell me I’m older, tell me I’m slower, Tell me I can no longer fly. I want you to!”

No, it’s not a coincidence. It’s not a coincidence that today they are still at the peak of their of their careers regardless their age. It’s not a coincidence that for both of them are now arriving the most difficult challenges, risking a drop – understandable for anyone except them – in their performances which looks more and more upcoming year after year. Finally, it’s not a coincidence that everybody questions themselves how and how much they’ll be influential and how many and which will be the benefits for them, for the others, for their new teams and for the entire movements represented by these teams. It’s just the ordinariness of being Cristiano Ronaldo or Lebron James, so different and so similar in a world which they dominated and still want to dominate in a so different, but so similar, way, in two different sports which have never been so similar, in this special summer. Even if you aren’t Juventus supporters. Even if you arent Los Angeles Lakers supporters.